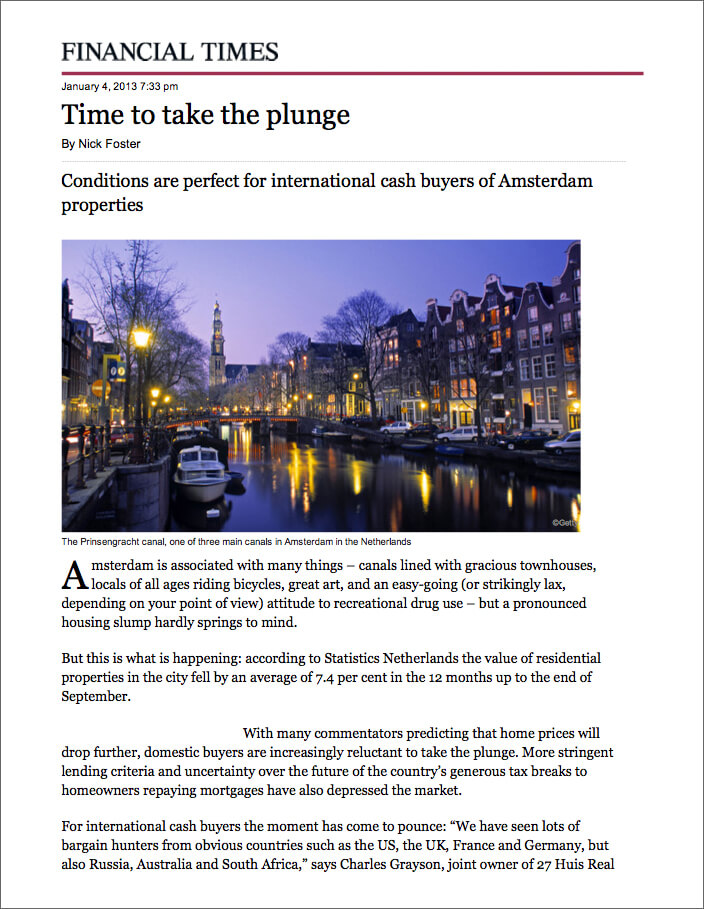 Herengracht 70-B, Amsterdam, The Netherlands
By Nick Foster 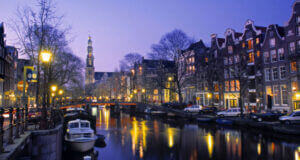 The Prinsengracht canal, one of three main canals in Amsterdam in the Netherlands.

Amsterdam is associated with many things – canals lined with gracious townhouses, locals of all ages riding bicycles, great art, and an easy­going (or strikingly lax, depending on your point of view) attitude to recreational drug use – but a pronounced housing slump hardly springs to mind.

But this is what is happening: according to Statistics Netherlands the value of residential properties in the city fell by an average of 7.4 per cent in the 12 months up to the end of September.

With many commentators predicting that home prices will drop further, domestic buyers are increasingly reluctant to take the plunge. More stringent
lending criteria and uncertainty over the future of the country’s generous tax breaks to homeowners repaying mortgages have also depressed the market.

For international cash buyers the moment has come to pounce: “We have seen lots of bargain hunters from obvious countries such as the US, the UK, France and Germany, but also Russia, Australia and South Africa,” says Charles Grayson, joint owner of 27 Huis Real Estate, who estimates that 70 per cent of his business comes from non­Dutch clients.

Most international buyers want a pied­à­terre on a canal with period features needing no additional modernisation. High on their wish­list is an open­plan kitchen and a second bathroom, according to Grayson.

“Dutch buyers want these things too, of course, but many are not willing to pay a premium and are often satisfied with a single bathroom and a closed, galley­style kitchen,” he says.

In the Jordaan, a trendy, village­like district of tranquil canals and speciality stores to the west of downtown, €649,000 is the asking price for a 143 sq metre, four­storey townhouse with three bedrooms, available through 27 Huis Real Estate. The property was renovated in 2006, with the kitchen moved up two floors to bring it closer to the roof terrace, to make barbecuing easier. And new skylights give the home a feeling of space, an important consideration in a city where even rooms in upmarket properties can sometimes feel rather claustrophobic.

It is easy to see why the perfectly gentrified, former working­class Jordaan is a favourite of overseas buyers, but it is also a place of contrast, with a pervasive, kooky atmosphere rather at odds with a deep­rooted conservatism.

On the one hand the smell of cannabis hangs in the air outside coffee shops, and businesses exist in self­consciously odd combinations – a vintage record shop combines with an organic grocer, for instance, and a hair salon is also an artist’s atelier. But residents and store owners keep their streets clean, homeowners put up countless signs instructing cyclists where not to park their bikes, and everyone paints their door and window frames white.

Broeren & Wiegers is asking €1.69m for a 300 sq metre apartment in a mansion overlooking the Herengracht canal in the so­called “canal belt”, an area made up of the Herengracht, Keizersgracht and Prinsengracht canals that has been made a Unesco World Heritage site for its wealth of 17th­century architecture. The property has four bedrooms, parquet floors and four­metre high ceilings. There is no garage but Centraal railway station and Dam Square – where the royal palace is located – are both 10 minutes’ walk away.

Buyers with cars in Amsterdam’s historical centre will have to look for a garage – a space costs from between €50,000 and €100,000 depending on size and location, according to agent Sander Wiegers – or join the queue for a resident’s parking permit, which can take up to five years to be granted.
Modern alternatives include a nine­bedroom house with four reception rooms and a garden on a 589 sq metre plot in the leafy Amsterdam South district, convenient for Schiphol airport. The property has space for four cars and the asking price is €3.99m through Knight  Frank. 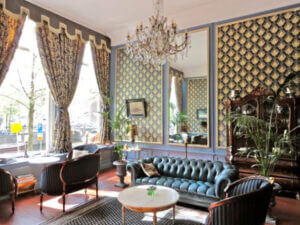  A four­bedroom period property overlooking the Herengracht canal on sale for €1.69m.

Parking restrictions aside, Amsterdam is experiencing a near­perfect storm for overseas buyers. Prices are dropping but the housing stock has never been in better condition: during the boom years, Dutch banks routinely included large amounts for renovations in mortgage contracts, sometimes even paying builders directly. Meanwhile, the government has tried to stimulate the property market by cutting transfer tax from 6 per cent of the purchase price to 2 per cent.
Second­home owners also have a safety net in the form of the city’s healthy expat rental market. The wider Dutch economy is in the doldrums but Amsterdam, with its busy international airport just outside the city at Schiphol, and acres of shiny new offices on the south side of town, is still a popular base for business. In 2011, 118 new international companies set up offices in Amsterdam, creating jobs for 1,231 people, according to Amsterdam city hall – a hike of 18 per cent compared with the previous year.
Life in the city can be rewarding, according to Melanie Brown, a fashion designer originally from Buckinghamshire in the UK who moved to the city in 1989 and now has a boutique, Brown Clothes, and studio in the Jordaan.
“Amsterdam is a compact city, it’s easy to get around and it’s not overwhelming. It’s also beautiful, and I feel privileged cycling to work in the morning and stopping on a canal bridge to take in the view,” says Brown.
 Culturally, the city is expecting a boost this spring when the Rijksmuseum opens its doors again after years of refurbishment. In September, the city’s Stedelijk Museum, housing an important collection of modern and contemporary art, re­opened after more than a decade of renovations.
Examples of Dutch ingenuity are never far away, even in an ailing housing market. At IJburg, on the east side of the city, a new island with homes for 700 families will be created out of sand dredged from shipping channels. The first residents should be moving in by 2017.
­­­­­­­­­­­­­­­­­­­­­­­­­­­­­­­­­­­­­­­­­­­

• The city has 780,000 inhabitants and an estimated 881,000 bicycles
• It has an inventory of 8,863 buildings from the 16th, 17th and 18th centuries
• There are an estimated 16,000 concerts and theatrical performances held in Amsterdam each year
• Amsterdam is home to the third­ biggest Japanese community in Europe (after London and Dusseldorf)
• Estate agent and legal fees, plus a 2 per cent property transfer tax, add approximately 5­6 per cent to the purchase price (about 7 per cent if a mortgage is needed)
What you can buy for …
€500,000: A renovated two­bedroom apartment just outside the centre
€1m: A three­bedroom apartment in the canal belt
€5m: A 600 sq metre loft residence on a canal in the centre of Amsterdam, with a separate maid’s flat and private parking
FirstFT ­ Twitter earnings, Saudi Selling greenbacks ahead of the Greek aid line­up succession shake­up Fed
       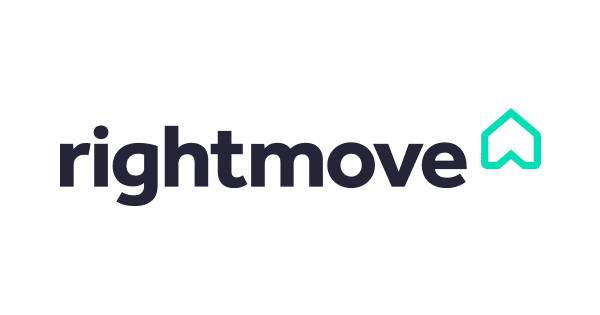 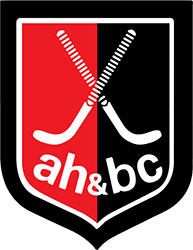 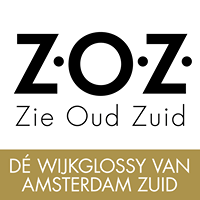 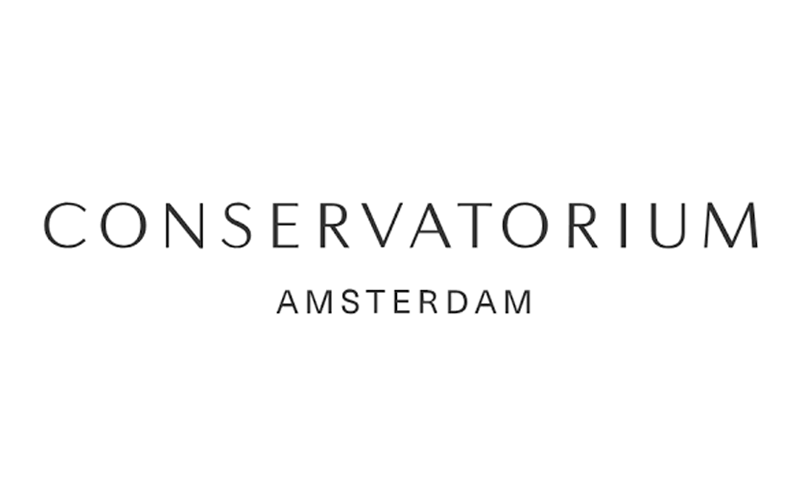